This is an article about a person. As such, only admin edits are allowed. You may request a change to the article in the comments section. 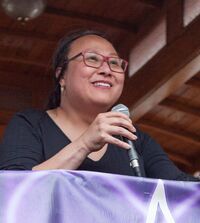 Cecilia Chung is a civil rights leader and activist for LGBT rights, HIV/AIDS awareness, health advocacy and social justice. Cecilia is a trans woman. Her life story was one of four main storylines in the 2017 ABC miniseries When We Rise about LGBT rights in the 1970s and 1980s.

Cecilia was born in Hong Kong in 1965 and later immigrated to Los Angeles with her family in 1984.[1] A year later, she moved to San Francisco to attend [[[wikipedia:City College of San Francisco|City College of San Francisco]] before transferring to Golden Gate University in 1987 with a degree in international management. Afterwards she spent a few years working as a court interpreter in Santa Clara County,[2][3] and as a well-paid sales trainer at a financial company.[3]

Cecilia has spent much of her adult life advocating for health related issues affecting the LGBT community. This has included working as a HIV test counselor at UCSF AIDS Health Project, HIV Program Coordinator at API American Health Forum and as Deputy Director at the Transgender Law Center.[1] Additionally, Cecilia is the first transgender woman and first Asian to be elected to lead the Board of Directors of the San Francisco Lesbian, Gay, Bisexual, and Transgender Pride Celebration, and the first transgender woman as well as the first person living openly with HIV to Chair the San Francisco Human Rights Commission.[4]

Cecilia founded San Francisco Transgender Advocacy and Mentorship| (SF TEAM) to provide events for the transgender community through the San Francisco LGBT Community Center. She was also one of the founders of the annual Trans March.[1]

In 2013, Cecilia made headlines by making San Francisco the first city in the country to pay for gender reassignment surgery for uninsured transgender patients through her appointment to the Health Commission by Mayor Edward Lee. Through her appointment Cecilia was also able to provide training to San Francisco Department of Public Health staff members around transgender issues called “Transgender 101”.[2]

Currently, Cecilia serves on the Presidential Advisory Council on HIV/AIDS, the current chair of US PLHIV Caucus and is also the Senior Director of Strategic Projects at the Transgender Law Center.[5]

In 1992, Cecilia decided to go into transition. She became estranged from her family due to their lack of understanding towards her being transgender. She also had to resign from her around-the-clock position as a sales trainer at the financial company to facilitate the process. She then relied on her court interpreter job as the sole source of income, whose employment contract was soon terminated following a judge noticing her physical changes due to transition.[3] She eventually ended up living on the streets and had to resort to sex work for livelihood.[3] Being a sex worker then subjected her to sexual and physical violence.[3] She also turned to drugs for self-medication.[3] In the same year, she was diagnosed as HIV positive.[3]

In 1995, almost 3 years after having been homeless, Cecilia was stabbed during a sexual assault attempt and taken to the emergency room.[3] Her mother, who was the emergency contact, came to the hospital for a visit and the two reconciled.[3] Since then, Cecilia completed her gender reassignment surgery in Bangkok in 1998.[2]

Ivory Aquino plays Cecilia in the miniseries about LGBT rights called When We Rise.[7]

Retrieved from "https://gender.wikia.org/wiki/Cecilia_Chung?oldid=39804"
Community content is available under CC-BY-SA unless otherwise noted.